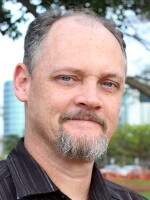 Jason Taglianetti
Jason Taglianetti joined Hawaiʻi Public Radio in October of 2006 as its multimedia production manager. Born and raised on Oʻahu, Jason grew up backstage, due to his parents, both theatre artists. In 1996, Jason attended the Art Institute of Seattle, where he studied Audio Production under many of the sound engineers, musicians, and music producers responsible for Seattle's grunge sound. Returning home to Hawaiʻi, Jason began his career in a familiar place -- the theatre. Today, Jason is a multiple award-winner for his sound design work for the stage. He also has several album credits and is a licensed amateur radio operator.
See stories by Jason Taglianetti
Top NPR Stories
More from Hawai‘i Public Radio