Queen Elizabeth II died Thursday at age 96 as the longest-serving monarch in British history. Her death is a major milestone for the country, triggering an outpouring of national affection and grief, NPR reports.

HPR’s Ian Capps, originally from London, spoke to The Conversation about being in the city for her coronation in 1953. He was 11 years old.

"My sister and I were allowed to be on Park Lane and the soldiers there allowed us to creep through and be in front of them so that we could see this incredible parade of carriages and everything from the coronation," he said. "I still remember the sense of immense hope that this young, wonderfully attractive and very empathetic young girl, young lady, represented. The final end of the war, if you like."

He recalled how she and her parents stayed in London during World War II while many others left the city.

"The future queen was always there, visiting the disaster areas, encouraging people and representing the sort of figurehead that she later knew so well how to complete," he said. "She was independent, and she was always there, and never crossed over the boundary into politics."

Capps hosts The Early Muse, a long-running classic music show on HPR-2. He has worked for the news company Reuters and was president and CEO of PR Newswire in the '90s. 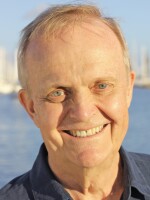 Ian Capps
Ian Capps is creator and host of The Early Muse, a weekly program of Hawaiʻi Public Radio which has been on air continuously since December 2004. The program explores the development of Western Music over the 500 years from the 12th through the 17th centuries. He has been an active volunteer in HPR's Music Department since coming to the Islands in 2002.
See stories by Ian Capps
Top NPR Stories
Related Stories