Heavily armed protesters are becoming a feature of demonstrations across the United States. Nationwide, the growth of militia groups has been surging for the past decade.

In 2008, there were more than 500 groups, according to the Anti-Defamation League. At demonstrations, they are often seen wearing camo, tactical vests, and carrying semi-automatic rifles.

But another accessory can now regularly be spotted: brightly colored aloha shirts. The tropical-themed, button-up shirts have been seen at protests in Oklahoma, Michigan, Texas, and Washington State. Even flower lei have made appearances.

Different groups and individuals across the country have picked up the trend, including militias like the Oath Keepers and the Three Percenters. Collectively, the armed individuals donning aloha attire unofficially call themselves the Boogaloo Boys (often spelled “bois”).

The term boogaloo originally referred to a style of Latin music developed by black and brown communities in New York City in the 1960s. Boogaloo’s journey from Spanish Harlem dance halls to right-wing militias is a convoluted one, winding through some of the darker corners of the internet.

Reece Jones, chair of the geography department at the University of Hawaii at Manoa, recently traced that journey in a viral Twitter thread. Jones studies immigration and was researching the alt-right’s views on migration as part of an upcoming book when he discovered the trend of armed men appearing at public protests in aloha shirts.

“It all goes back to a 1984 movie, called 'Breakin’ 2: Electric Boogaloo,'” Jones said. The film was widely panned, but went on to achieve cult classic status. Over the years, “Electric Boogaloo” became a running internet joke for a bad or unwanted sequel of any kind.

That joke found its way to far-right message boards on websites like Reddit and 4-Chan, where  it collided with conspiracy theories about the seizure of privately owned guns and a second civil war against the federal government.

Boogaloo Boys broadly believe that a second civil war, or Boogaloo, is coming to the United States. According to boogaloo ideology, the primary catalyst for such a conflict will be some kind of attempt by the federal government to seize privately owned firearms and ban future purchases.

So why have anti-government, gun owners adopted aloha attire as a symbol of their cause? Jones says the use of aloha shirts stems from similar descriptions for boogaloo that have emerged: Big Igloo and Big Luau.

Symbols like palm trees, tropical patterns, and aloha shirts have become non-verbal signs for the mostly young men who believe the “Big Luau” is coming.

Ironically, young men showing off is not that different from how aloha shirts were first created in the 1920s. According to Dale Hope, a second-generation shirt maker in Honolulu and author of a book chronicling the history of aloha shirts, adolescent boys in Hawaii conceived of the first shirts.

“There are stories of local kids going to these dry goods stores, these tailor shops and buying fabric, and bringing them home to their mothers' dress makers, and having one-off shirts made,” Hope recounted in an interview.

High school boys began wearing the shirts with Japanese motifs, made from kimono cloth. Those eventually evolved into the island-themed prints that have spread around the globe since tourists began flocking to Hawaii in the 1960s.

In much of the world they’re called Hawaiian shirts, although they don’t have Hawaiian cultural origins. However, Native Hawaiian designer Kuhao Zane, son of long-time designer Sig Zane, says, that label may be increasingly accurate.

“I think that Hawaiians really have adopted aloha shirts as their medium, just as we adopted the ukulele,” Zane mused.

Just like the now-ubiquitous aloha shirts were pioneered by members of Hawaii’s several immigrant communities, the ukulele was originally brought to the Hawaiian Islands by Portuguese migrant workers from the archipelago of Madeira.

They came seeking work on sugar plantations, which became a melting pot of Hawaiian, Japanese, Chinese, Filipino, and European language and culture. The ukulele became the backbone of modern Hawaiian music, now a genre entirely its own, and helped give birth to kanikapila culture, the free-flowing string music of Hawaii.

Zane, whose designs incorporate traditional Hawaiian stories, acknowledges that it is the inevitable nature of art to be adapted and modified by others once it has been released into the public space. But he is not overly concerned about the growing association between militia groups and aloha shirts.

“I'm not necessarily that worried, because you're not changing Hawaii,” he said emphatically. “They can do their thing, that's cool. If you were to come to Hawaii for the first time and see somebody wearing an aloha shirt, and they tell you the story about it, and it's literally about a mountain that is right behind you, I think that is an authentic experience that nobody will be able to take away.”

He notes that Sig Zane Designs’ business is primarily focused on the local market in Hawaii, where certain aloha shirts have been considered professional and formal wear for decades. Zane also thinks there is a clear aesthetic distinction between aloha shirts designed in Hawaii and the tropical-themed offshoots gaining popularity on the mainland U.S.

“We’re not available at Walmart,” he adds with a chuckle.

The use of aloha shirts by militia groups remains a mostly niche trend, but one that could be of growing concern to Hawaii’s $18 billion tourism industry, now trying to rebuild after being decimated by the near-stop of air travel resulting from the COVID-19 pandemic and recession.

A spate of recent national articles have publicized the Boogaloo Boys and their pairing of bright shirts with subdued tactical equipment. Several major social media platforms, including Facebook and Discord, recently banned Boogaloo-centered accounts and pages over concerns they were inciting violence.

When asked what he thought of the militia trend, shirt maker and historian Dale Hope said he thinks aloha shirts may actually undermine the Boogaloo Boy’s message of preparing for an armed conflict.

“An aloha shirt tends to put a smile in your heart and a smile on other people’s faces,” Hope said.

However, the trend shows no signs of slowing down. In fact you can now purchase aloha shirts that feature guns, alongside flowers and palm trees. 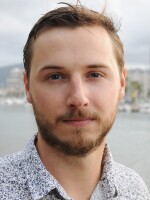