I can't go one week without watching a horror film.

I'm really into horror, whether it's books or films. At age 12 my girlfriends were living by Judy Blume, but I was reading Stephen King thrillers for the second time.

The first time I got detention in high school was for reading Clive Barker's The Damnation Game instead of the assigned book. I thought I was slick too, sliding my newest horror book into my looseleaf notebook. I was so engrossed that I gasped in the middle of class, much to the dismay of my classmates and teacher. It was sort of hilarious. He took my book and handed me detention. I learned that he was a horror fan, and we chatted about our favorite authors. He ended up reading my book during detention and thanked me for turning him on to someone new.

My taste in films runs the gamut with classics like The Texas Chainsaw Massacre and The Shining to found footage films like Butterfly Kisses and The Lost Footage of Leah Sullivan. For the former, I cower in fear while enjoying the adrenaline rush. For the latter, I sometimes have fantasies of tossing my television through my living room window for wasting 75 to 90 minutes of my life. But yet I consistently (and dare I say, obsessively) want more.

My love of all things horror started when my mom let me read her "spooky books" (her endearing term for horror novels).

I waited with bated breath for my mom to finish her latest spooky read, because I knew that I got it next. I'd insert myself into this fictional world of monsters and demons living in terror to turn the next page. My mother read The Exorcist by William Peter Blatty, and it definitely spooked her. I developed the courage to read it years later, then saw the movie against her wishes. It was the scariest movie I've ever watched to this day, and the only horror film I refuse to rewatch.

It took me years to fully realize why my mother loved those spooky books so much. Those horror stories gave my mother the courage to leave her abuser.

While my mother was putting on a brave face, she was dealing with her very own monster. I believe that her escapism into the horror genre allowed her to face her reality within a controlled environment.

She knew that her life wasn't in danger when she read these books. Her empathy toward the characters being chased by monsters and possessed by demons, and the happy ending (well, sometimes) for these protagonists, is what I believe allowed her to think that she too can escape the monster on his way home from work, and have a happy ending.

My mother found her strength through reading these books. She built courage, faced her fear, and learned to fight. It was a form of catharsis for her. Purge and purification. The purging of her negative emotions like fear, anxiety, and low self-esteem. The purification of her newfound emotions of bravery, needing to annihilate her monster.

Where my love of horror films began

Novelists like Clive Barker and Stephen King dominated our little bookshelves, but it was a book by Jeffrey Konvitz that tilted me on my axis. The Sentinel was written in 1977. I remember my mother hiding it in the freezer because she didn't want me to read it. Of course I saw this as a challenge. Unfortunately, I did not get a chance to read that book until I was an adult. However, I did something much worse: I saw the movie. And that, dear reader, is where my love for 1970s and 80s horror films began.

This movie has everything: big movie stars like Cristina Raines, Burgess Meredith, Ava Gardner, Chris Sarandon and an adorably young Beverly D'Angelo. It had supermodels, penthouse apartments overlooking Central Park and a blind priest. And it had demons, both metaphorical and physical. This movie scared the bejesus out of me. And I wanted more.

In the days before streaming, you would visit video stores to rent your movies. We had Blockbuster, Erol's Video and a ton of mom and pop shops. Every Friday, my mother and I would hit up these video stores for the best horror VHS tapes. She introduced me to movies like Ghost Story, Amityville Horror, Re-Animator, The Evil Dead and so much more.

Passing down a love of horror

I still watch these movies, typically in the early morning on the weekends while my husband and daughter are still sleeping. I think about my mother and feel a sense of calm and peace. I remember Bruce Campbell bringing her to tears through her laughter in The Evil Dead. When it's snowing outside, I'll watch Ghost Story, because she and I both loved the beauty of the snow in the film.

There are newer films that I've grown to love and/or respect — almost anything made by A24, Ari Aster, Blumhouse and Jordan Peele. Foreign horror, absolutely! IFC Midnight, holy smokes!

When I watch these newer films, I think about her reactions if she were alive today. I believe that my mother would be the biggest Jordan Peele fan because of Us. She'd probably check out Hereditary twice. Speak No Evil would leave her speechless.

My mother passed down her love of horror to me. These books and films gave her courage, and she wanted me to live courageously. In her eyes, this genre would help her help me to be the strong and independent woman that I am today. She was right. 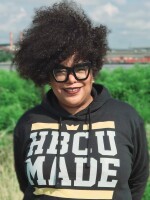