First up in this short series is Alika Maikau. Alika is a writer and film maker from K?ne?ohe. His most recent film, "Moloka?i Bound," showed as part of the sold-out Made In Hawai?i Shorts at HIFF last week. One of his other films, "Mauka to Makai," won the award for Best Short in the Made in Hawai?i category at last year's HIFF. His selections for tonight's show carry a theme that is mainly mellow and lo-fi. To quote Alika, his selections are "music I'm listening to while I'm developing my next film." You can try and get in the rush line for the next showing of the Made In Hawai?i Shorts on November 17th, as tickets have already sold-out for that showing as well. 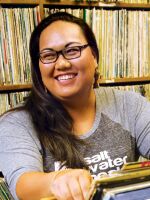 Paige Okamura
Paige Okamura (DJ Mermaid) is a keiki papa of Māeaea, Waialua, Oʻahu. Her expertise in Hawaiian music is based out of her love for her language and her culture. She honed her expertise in Hawaiian music at KTUH FM Honolulu as the former host of the Hawaiian language show "Kīpuka Leo" before branching out to create her own bi-lingual show "Kai Leo Nui." She's also a versatile club DJ trained by our very own dj mr. nick with an eclectic, diverse musical library. Formerly Bridging the Gap's Tuesday night host, she now hosts Hawaiʻi Kulāiwi, Sundays at 6 p.m. on HPR-1.
See stories by Paige Okamura
More Episodes