Advocates Worry About A Growing Alternative To Pre-Trial Jailing

There are a lot of efforts around the country to end cash bail. And as part of that, court reform advocates are worried about a growing alternative to jailing people before trial - ordering them to wear electronic ankle monitors and then making them pay the cost. Carolina Hidalgo of St. Louis Public Radio reports.

CAROLINA HIDALGO, BYLINE: Starting July 1, judges in Missouri have a new set of rules to follow when setting bail. They'll have to figure out how much a defendant can afford and try to set bail accordingly. The new rules are just the latest attempt to reform Missouri's justice system. But as courts across the country move toward cash bail reform, an increasing number of defendants are being ordered to wear electronic ankle monitors.

A study by Pew Charitable Trusts finds that the number of people monitored before and after trial more than doubled from 2005 to 2015. Isaac McClendon was ordered to wear an ankle monitor last November after being arrested on charges of fleeing from police. The device allowed him to get out of jail while awaiting trial, but there was a catch - he had just 24 hours to come up with $300 to pay for the monitor.

ISAAC MCCLENDON: I was locked up with people that didn't even have $5, $2 on their phone to call home and talk to their kids and their family. So I know they don't have $300 getting released within 24 hours.

HIDALGO: Court reform advocates say these fees actually replicate the problem of cash bail. Those who can afford the fees get to go home, and those who can't stay locked up. Jurisdictions in nearly every state now charge defendants for their ankle bracelets. Alec Karakatsanis runs a nonprofit law firm and has studied pre-trial supervision practices across the country.

ALEC KARAKATSANIS: One of the scandals of this issue is that nobody has bothered to really quantify the scope of it. It's so ubiquitous, and the costs are so staggering for impoverished people.

HIDALGO: In St. Louis, defendants ordered to wear an ankle monitor report directly to Eastern Missouri Alternative Sentencing Services, a private company that collects their fees. The company has public contracts in several eastern Missouri counties. Its president and founder, Michael Smith, did not respond to multiple interview requests for this story. Cherise Fanno Burdeen of the Pretrial Justice Institute says it's common for cities to turn to private companies in an effort to save taxpayer money.

CHERISE FANNO BURDEEN: It's almost like waiting in the bushes is a for-profit corporation who would be happy to provide you something that they will tell you is at no cost to you as a county or a city. But you've got to ask yourself, well, then at whose cost?

STEVEN OHMER: The court's not just imposing a cost just because, you know, well, we want to penalize this poor individual. No. You know, you're trying to balance the conditions of ensuring the person appears in court with the protection of the community.

HIDALGO: But in St. Louis, the court doesn't gather data to analyze the success rate of electronic monitoring. In some of the state's smaller jurisdictions, court officials do cover fees for people who can't afford a monitor. In St. Louis, Michael Milton with The Bail Project works closely with people awaiting trial. His group posts bail for people who can't afford it.

MICHAEL MILTON: We're still missing the very simple fact that these people have not been proven to be guilty of anything. We need to be thinking about, what does it actually look like to assist people as they go through their trial?

HIDALGO: His group connects people with social services and offers them court date reminders and rides to the courthouse. He says that 94% of The Bail Project's clients make it to all of their court dates. And more than half end up with their charges dismissed. That data, he argues, shows that costly electronic monitoring is less necessary than better resources for those arrested. For NPR News, I'm Carolina Hidalgo in St. Louis. Transcript provided by NPR, Copyright NPR. 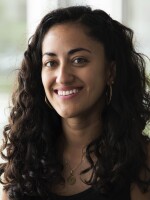 Carolina Hidalgo
Carolina Hidalgo joined St. Louis Public Radio in 2015 as the station’s first visual journalist. She now produces photographs, digital stories and occasional radio features with a focus on social justice issues. Previously, she worked as a staff photographer at the Naples Daily News and as a photo intern, online picture editor and video producer at the Tampa Bay Times. Carolina also volunteers as a mentor and educator with NPR’s Next Generation Radio project. She is a proud native of New York City and a member of Women Photograph and Diversity Photo. Her work has been recognized by Pictures of the Year International, the Florida Society of News Editors, the National Association of Black Journalists and the National Association of Hispanic Journalists.
Top NPR Stories
More from Hawai‘i Public Radio